Non-meat ‘pork’ is a dish too far for observant Jews, Muslims 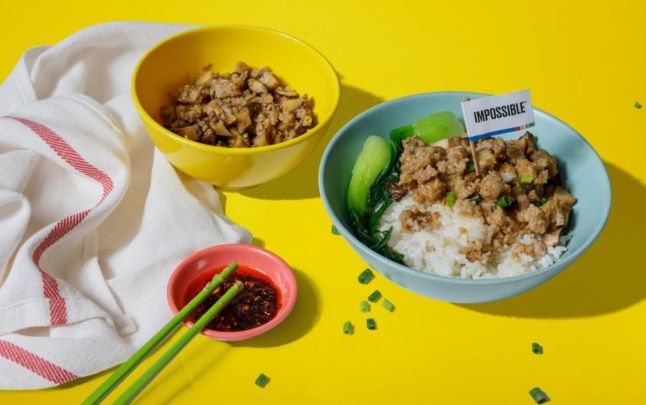 Jewish and Muslim leaders say that, although a new plant-based product that looks and tastes like ground pork isn’t really meat, it isn’t really kosher or halal, either.

Two organizations that certify kosher and halal foods — Islamic Services of America and Orthodox Union Kosher agency — have indicated that Impossible Pork is problematic, even if its ingredients meet their strict standards.

“We would not approve a product with the name using the word ‘pork,’” said Timothy Hyatt, vice president of Islamic Services of America, adding that rejection of the word is “an international standard” among the world’s halal certification agencies.

Rabbi Menachem Genack, Orthodox Union’s kosher division chief executive, said that Impossible Pork has not yet received an endorsement, even though the plant-based, ground beef substitute Impossible Burger has.

Impossible Pork made its debut in a New York City restaurant Sept. 23, seemingly offering an alternative for observant Jews and Muslims, who are forbidden from consuming “the swine, though he divide the hoof, and be clovenfooted, yet he cheweth not the cud; he is unclean to you,” according the Book of Leviticus.

For the observant among America’s 3.45 million Muslims and 7 million Jews, the question of what can and can’t be eaten is not trivial. Creating products officially designated as halal or kosher has generated billion-dollar industries serving both communities.

Mr. Hyatt said that Impossible Pork “could be halal-compliant without any pork base, but it would also have to be clean and clear of any other sub-ingredients that could be non-halal.”

And Rabbi Genack said giving a stamp of approval for something named “pork” could cause marketplace confusion.

“We’re still trying to think what’s the right approach because a lot of this has to do with simply sensitivities within our community, and, frankly, also within the Muslim community, so we try to try to be sensitive to both in terms of when whether it’s kosher or not,” the rabbi said.

Impossible Foods, maker of the non-meat pork product, did not immediately respond to a request for comment.

Consumers who strive to observe their faith’s dietary restrictions aren’t likely to seek out an imitation, even if it wouldn’t technically violate their faith’s tenets.

Ms. Rueven said that even without kosher certification, “just the word ‘pork’ may be off-putting enough to have [kosher eaters] steer clear of it.”

An Islamic student noted a deeply ingrained disinclination for eating pork in Muslim culture, consumption that the faithful “find repulsive.”

“What’s the point of going out and trying and curiosity when you have so many other options that God is already ordained?” said the student, who asked not to be identified.

Compliance with the kosher standard varies among American Jews, said Roger Horowitz, a food historian and author of “Kosher USA,” which delves into the history of the standard.

“Most Jews in this country are not observing kosher,” he said. “The number of Jews that are observant, kosher, is a relatively small number.”

Meanwhile, Dr. John McDougall, a physician who’s spent decades advocating for a healthier lifestyle and now counsels patients via www.drmcdougall.com, said the new product might appeal to “most people who take this issue as a religious” one, but added that non-meat “pork” falls flat in terms of nutrition and should be avoided for that reason.

Impossible Pork, he said, is “supplying the consumer with something that is artificial, unknown to nature.”

Dr. McDougall said “it’s a good idea not to kill animals,” but “people should not be learning to eat a substitute for something that’s inherently bad for them and the planet.”